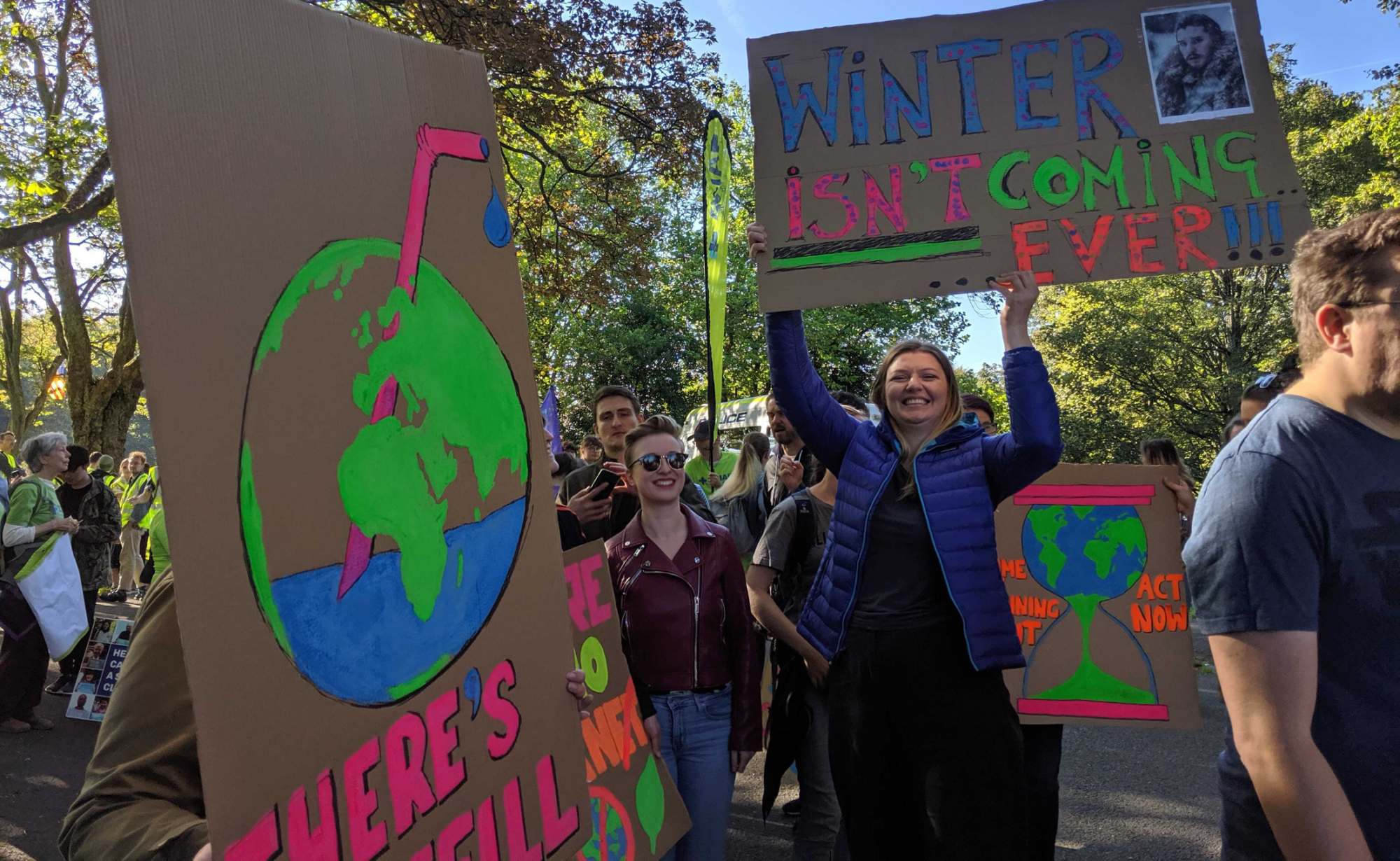 In August 2018, 16-year-old Greta Thunberg started the “School Strike for Climate” movement. Every Friday, she would sit outside the Swedish Parliament in Stockholm, urging politicians to take the climate crisis seriously. Soon, students across the world followed her example.

One year later, on September 20th 2019, millions of people around the world came together in the Global Climate Strike. Both teenagers and adults marched through the streets, with the aim to put pressure on politicians to take action against climate change.

Organizers have estimated that over 4 million people participated, across 2,500 events in 163 countries. At Twig, we share scientists’ concern about the climate, and to show our support, some of our staff created their own signs and participated in the march.

Only a few days later, on Monday the 23rd, the UN Climate Summit was held in New York. The UN Secretary-General António Gueterres invited world leaders to discuss the Paris Agreement—a policy that has been signed by 194 countries.

The aim of the agreement is to keep the average global temperature rise below 2°C, and if possible, even below 1.5°C. In order to achieve this, countries need to reduce greenhouse gas emissions by 45% over the next ten years, and achieve net zero carbon emissions by 2050.

Having a net zero carbon footprint—or being carbon neutral—means either stopping all carbon emissions altogether, or making sure to balance any emissions through offsetting—for example planting trees—or through carbon dioxide removal.

But countries need to take concrete action and come up with clear plans in order to achieve these goals, which is what was discussed at the UN summit. Changes will be made across renewable energy, agriculture, forest and ocean management, infrastructure, and finance.

What can you do?

There are many things that we can do as individuals to reduce our carbon footprint. Here are some ideas: incorporate more vegetarian meals into your week; limit your food waste; use public transport, walk or cycle; buy less stuff (especially clothes); be careful to not use unnecessary water; give to charities such as WWF; and—perhaps most importantly—use your voice to put pressure on politicians through voting or signing petitions.

Last but not least, it’s important to educate yourself. Twig Science itself provides students with a thorough grounding in how humans affect the environment, with modules like Save the Island, How to Survive an Ice Age, and Cities of the Future. Meanwhile, an easy way to engage your students in real world news, including the climate crisis, is with Twig Science Reporter—a weekly science news service bringing topical news into the classroom with engaging videos and supporting material. 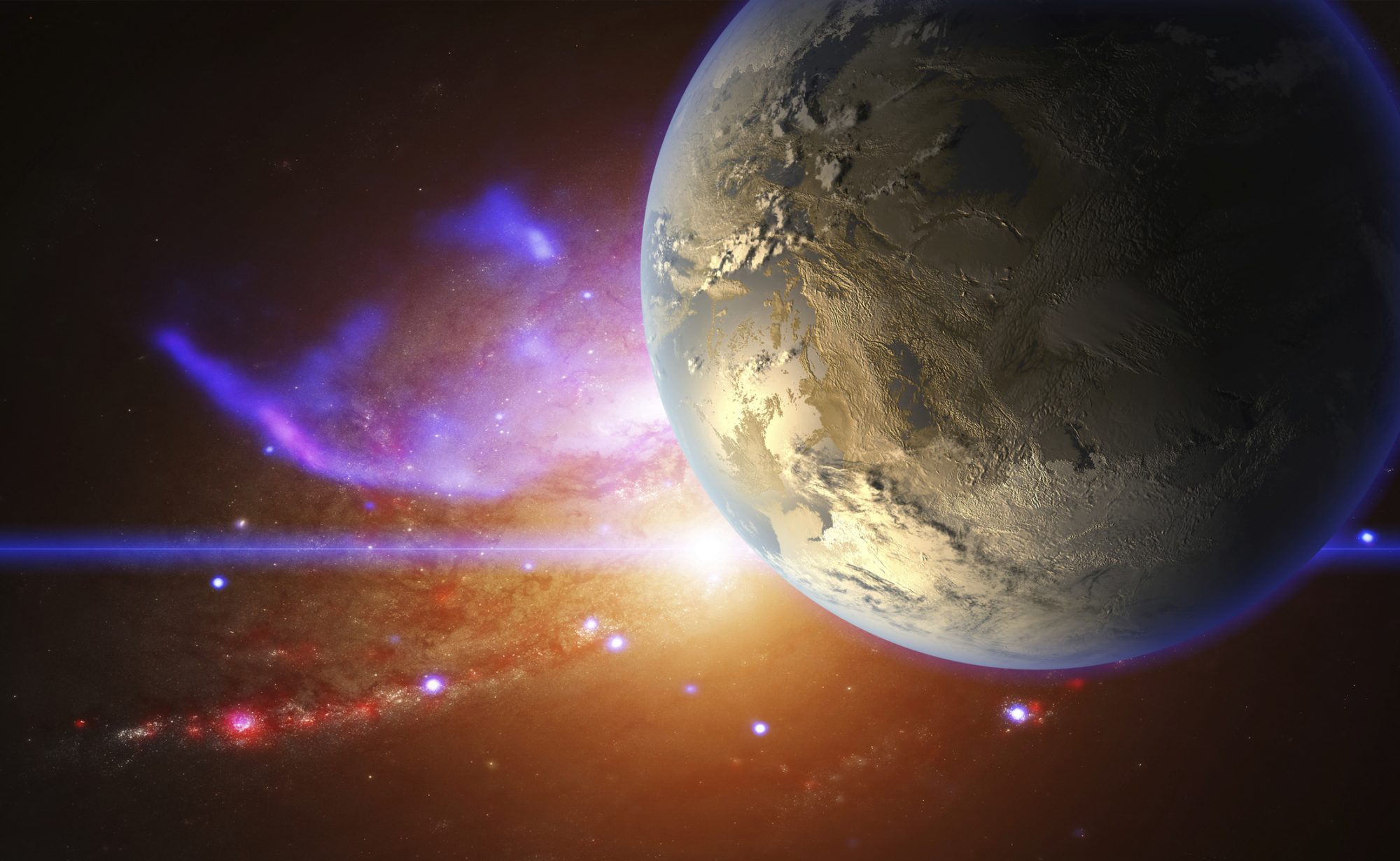 For the first time, scientists looking for life outside the Solar System have identified a faraway planet with water vapor in its atmosphere.

For planets to be able to contain life, they must be in a star’s “Goldilocks zone,” where water is liquid—neither too close to the star (or water would evaporate in the heat) or too far away (where it would freeze).

The planet in question is called K2-18b, and it was first observed in 2015. Follow-up studies using the Hubble space telescope revealed the water in the planet’s atmosphere—possibly in the form of rain or clouds.

The discovery is an encouraging sign for scientists searching the Universe for places other than Earth where life might have developed.

Planet K2-18b is what is known as an exoplanet. “Exo” means outside, and exoplanets are outside the Solar System. Scientists who look for these distant worlds are called astronomers.

“This is the first potentially habitable planet where the temperature is right and where we now know there is water,” said University College London astronomer Angelos Tsiaras. “It’s the best candidate for habitability right now.”

Being an astronomer can be exciting, rewarding work. That’s we included it as one of dozens of STEM roles students encounter with Twig Science, the investigation-based program developed for NGSS. In the Grade 5 module Patterns in the Night Sky, students meet an astronomer and learn all about how scientists gather information about the Universe. They learn about how to spot an exoplanet—and then try to find one themselves! And that’s not all they do as astronomers. They also investigate why some stars are brighter than others, why we only see them at night, and how they seem to move across the sky. They discover how to use the night sky to navigate, explore the constellations, and investigate the reasons why we don’t fall off the Earth!

Twig Science prepares students for a whole range of careers by enabling them to experience different STEM roles, from chemist to zoologist to architects. They go from working with a Hollywood special effects department to mapping real-life earthquakes as they happen all over the world. They read about and engage with scientists and engineers—from all walks of life—doing work that makes them think, “Yeah, I could do that.”

Visit Twig Science and get your students trying out dozens of possible futures.

There’s still one week to go until the new season of Twig Science Reporter, bringing you the latest science news from around the world every Thursday. You can see the trailer for the new season on our brand-new YouTube channel. Getting excited yet? Remember to like and share!

Meantime, to satisfy your appetite for the latest science news, here are some of the coolest current science stories we’ve uncovered. Enjoy!

Scientists in China might have discovered a way of getting teeth to repair themselves. They’ve come up with a gel that repairs tooth enamel—and kickstarts the growth of new enamel. Enamel is the hard material that covers the surface of our teeth, protecting them from decay. Unfortunately, sugary foods and drinks can damage tooth enamel—and once it’s lost, our bodies don’t grow it back. That’s why it’s so important that we look after our teeth. The scientists are hopeful that one day their gel could mean the end of fillings at the dentist—although that’s a long way in the future, so in the meantime we’d better keep avoiding unhealthy snacks!

The Mission Jurassic dinosaur dig has closed for the winter. A collaboration between the Children’s Museum of Indianapolis and museums in the UK and the Netherlands, Mission Jurassic is a major excavation of 150-million-year-old fossils in North Wyoming. The site has already revealed gigantic skeletons of a 24-meter-long brachiosaurus and a 30-meter-long diplodocus—along with enough so-far-unsorted fossils to fill three trucks.

Dramatic photos of Hurricane Dorian have been shared by an astronaut on the International Space Station. The second-strongest Atlantic hurricane in history has been causing havoc in the Bahamas and could be heading toward the east coast of the US, where states of emergency have been declared. And the storm looks just as bad from space, as European Space Agency astronaut Luca Parmitano’s photographs show.

The Cuban greater funnel-eared bat is one of the rarest in the world. In fact, it can only be found in one cave in western Cuba, which puts it at risk of becoming extinct. Conservation scientists have used an interesting technique to count these bats in order to get a sense of how at-risk they are—they painted the bats’ claws with nail varnish! Each bat got a distinctive manicure, meaning the scientists could tell them apart to count them. It turned out that around 700 bats live in the cave.