On March 11, 2020, the World Health Organization declared it a pandemic. (1) While the virus originated in China, the spread of the virus is slowing down there, and there are now more cases in the rest of the world than in China. The numbers of cases and deaths continue to rise in the US and Europe (with Italy worst hit). Other countries that have been hit badly are Iran and South Korea.

Many countries are now putting drastic measures in place to fight the virus. Italy has banned large events and unnecessary travel, (2) and larger events around the world are being cancelled or postponed.

These numbers might seem scary, but scientists around the world are fighting the virus. Among those leading the research are scientists at Twig Education partners Imperial College London, who have been researching how the virus spreads and how it affects the human body while also developing a vaccine against it.

Let’s break down what we know so far.

How dangerous is the virus?

The virus is one of seven in the coronavirus family, and its scientific name is Covid-19. Most coronaviruses cause only common cold-like symptoms while some are more dangerous, like the severe acute respiratory syndrome (Sars) that caused thousands of deaths in 2002. (3)

The mortality rate is still uncertain. On March 3, the World Health Organization reported that 3.5% of those infected had died worldwide. (4) However, we still don’t know exactly how many people have been infected, with less serious cases potentially going unnoticed. Professor Wendy Barclay at the Imperial College London Department of Infectious Disease says that the mortality rate is likely to go down since the cases that are discovered first are always the more serious ones, with a higher mortality risk. (5)

Who is more likely to get sick?

The vast majority of deaths will be those who already have weak immune systems, such as the elderly or sickly, and children under the age of two. (6) Older children and adults who are healthy and have a working immune system are less likely to get infected—and if they do, they have a very high chance of recovering.

How does it spread?

According to Wendy Barclay, Covid-19 is likely an airborne virus, just like around 50% of the common colds that infect humans. It’s not yet clear if the virus can spread in the early phase of infection, before a person shows symptoms, and this is something that scientists are keen to find out. While Sars had a higher mortality rate (10%) than Covid-19, we were able to control it quickly because only people who were obviously sick could pass on the virus. (7)

Scientists at Imperial, spearheaded by Professor Robin Shattock, have been working hard over the last months to develop a vaccine against the coronavirus. This will soon be tested on animals and could be ready for human trials as early as the summer of 2020. (8) In the meantime, it’s best to know the symptoms and protect yourself and others.

Covid-19 usually starts with a fever and a dry cough, followed by shortness of breath. It rarely causes sneezing or a runny nose. (9) If you have these symptoms, it’s probably worth getting tested—especially if you have recently traveled abroad. According to the World Health Organization, the time between infection and showing symptoms is 14 days, but some scientists say it could be as much as 24 days. (10)

Protecting yourself and others

There are some easy things you can do to avoid getting infected and to stop the virus spreading (this goes for all infectious diseases!):

Until a vaccine becomes available, we recommend you make sure to take precautions, watch out for symptoms, and avoid traveling to countries where there are high numbers of cases (such as China and Italy). 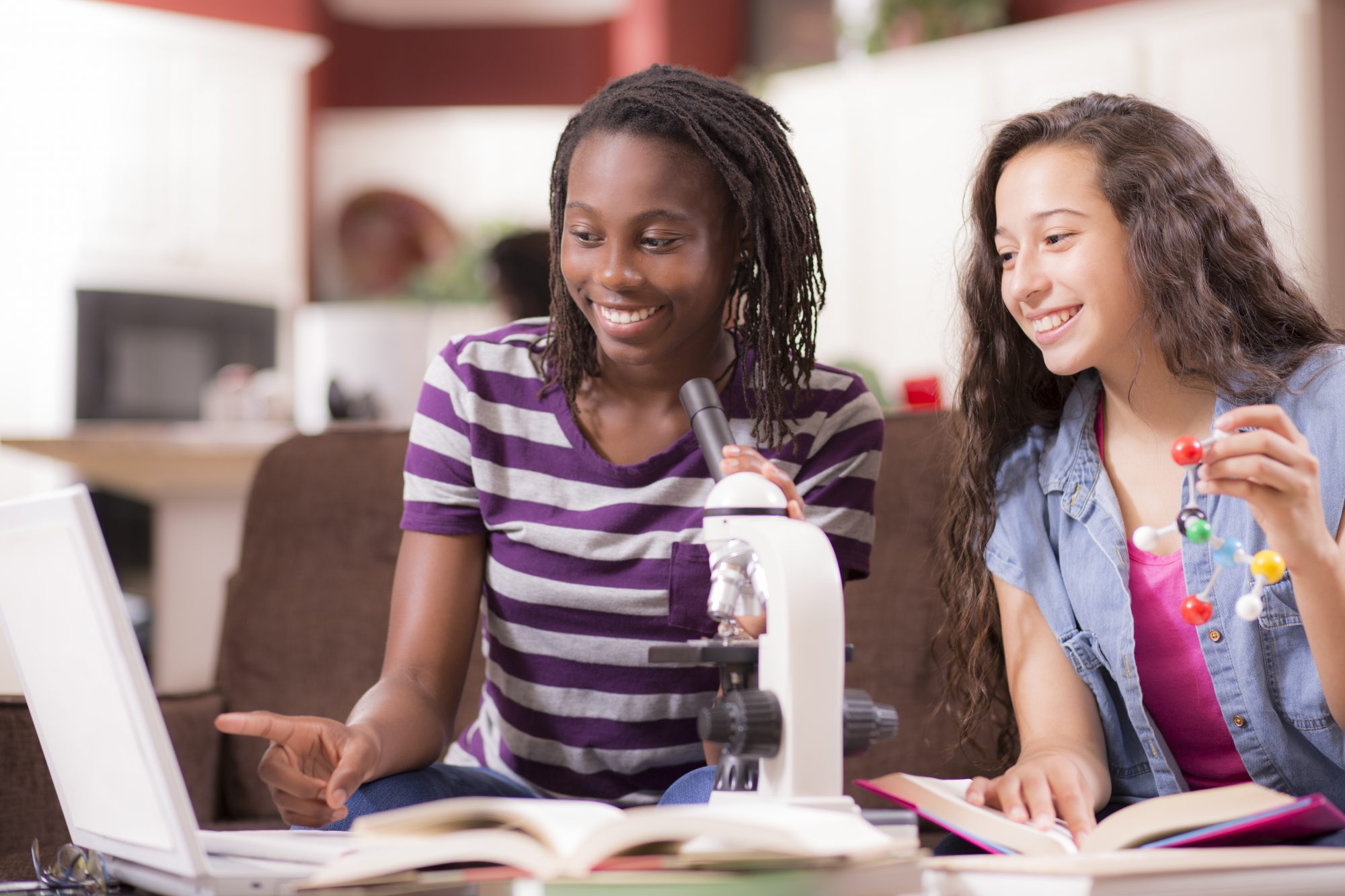 We know that many teachers spend a lot of time sourcing appropriate STEM videos to use in the classroom—valuable time that could be spent on other tasks. That’s why our goal is to provide teachers of all grade levels with standards-aligned, age-appropriate, and engaging video content and lesson materials.

Twig Secondary is our award-winning online resource for ages 11–16, containing thousands of STEM videos, activities, and supportive learning materials. Twig Secondary videos are perfect for making your science lessons more exciting, while allowing you to connect STEM topics to the real world. Let’s find out more:

These videos can be peppered throughout your lesson plans to improve engagement, or can be assigned to your students for them to watch in their own time.

View by standard or subject

You can explore videos either through our Standards view tool to find the right videos and learning materials for your lesson, or using the Twig Secondary Mindmap, which is organized into subjects, modules and topics. The unique design of the Mindmap makes it a great tool for showing your students the depth and breadth of a subject, and to illustrate how topics relate to one another.

Every video comes with extension activities, worksheets, diagrams, classroom images, multiple choice quizzes, key learning points, and review sheets. These support materials can be used together to form a full lesson, or you can cherry-pick what you need and add to your existing lesson plan.

The Twig Secondary assignment feature allows you to save valuable teaching time. You can easily assign films and quizzes for your students to watch and complete before attending their lesson, saving valuable face-to-face time for discussion and extension activities. This function is especially helpful in a distance learning environment when teaching time is even more precious.

Twig Secondary videos all come with voiceovers and captions in several languages, including Standard and Simplified English, Arabic, Chinese (Simplified and Traditional), Portuguese, and Spanish, allowing you to support your bilingual students and your English learners.

The Newsdesk is updated regularly with articles about current science events, and means that you can connect your students’ learning to topical news stories from the world of science.

Head over to Twig Secondary to request a free trial now!

There’s a common misconception that girls aren’t as interested (or as talented) in science and math as boys are—and sadly, this misconception affects the number of women working in STEM careers. Only 28% of workers in science and engineering in the US are women. This difference is even larger in the sciences that require a lot of math: in physical sciences, computer science and engineering, only 25–30% of junior workers and 7–15% of senior workers are female.

This all starts in school. While girls perform just as well as boys, and often better, in mathematics and science in K–12 (with the exception of computer science and engineering), they are less likely to study science at college.

The only science field where women receive half of the degrees is biological sciences. Women are underrepresented in computer sciences (18%), engineering (20%), physical sciences (39%), and mathematics (43%). The problem is even greater among minority women, who make up only 12.6% of those who have degrees in science and engineering.

Why is this important?

STEM careers, and especially those in engineering, math, and technology, are high-value jobs that are becoming more and more sought-after. Not only should women have the same opportunities to work in well-paid jobs, but the world also needs as many people as possible interested in these subjects in order to meet employment demands.

Many women have done outstanding things in STEM throughout history. For example, Nettie Stevens (1861–1912) discovered the X and Y chromosomes,  Lisa Meitner (1878–1968) helped discover nuclear fission (the basis of nuclear power) together with Otto Hahn, and Katherine Johnson (1918–present) was responsible for calculations that were crucial to sending the first American (Alan Shepard) into space. And that’s just to mention a few!

So how do you encourage girls to keep studying STEM subjects?

It all starts in the classroom. A recent study of young European women found that more than half (57%) said they would’ve been more likely to pursue a STEM career if their teacher had encouraged them. So here are three simple things you can do to encourage your students…

Demonstrate that you believe in your students by making an extra effort to address the girls in your class when asking questions, or by inviting them to extra-curricular activities that are STEM-related. The belief that girls aren’t as good as boys at STEM subjects still exists, even though it’s just not true.

By involving girls in the classroom, you show them that they are just as talented as the boys and that you believe in them. This will give your students the confidence to consider all sorts of careers—rather than questioning whether they are clever enough!

STEM jobs can be really creative, so it’s important to show that in the classroom. Take the opportunity to combine arts and science by involving your class in creative projects, such as designing their own playgrounds, creating shadow puppets, or producing their own guidebook to the night sky!

An important part of making a decision on what to study or what career to pursue is simply knowing what careers are actually available. So start by showing your students just how many different careers there are out there—as we wrote in a recent blog post, there are new STEM opportunities being created all the time.

It’s also important to expose girls to women who work in STEM—that way, they are more likely to be able to see themselves in the same role. This was something we took very seriously when developing Twig Science. We made sure that students were exposed to a wide range of different STEM careers, such as conservationists, earthquake engineers, and hydrologists—some of these are roles that students get to try out during investigations, and others are roles they learn about through interviews and case studies with real STEM workers.

So there you go—three easy steps toward encouraging girls to pursue STEM careers. Never underestimate the difference an encouraging teacher and a fun science class can make!

At Twig Education we share the NGSS vision of “All students, all standards.” We’re committed to providing experiences and opportunities to inspire each and every student.

We’re also aware that teachers and administrators face increasing challenges in terms of time, tools, and background knowledge. Twig Science provides a range of dedicated flexible professional learning options, including webinars on a range of topics.

Below, you’ll find a few webinars to begin your journey toward mastering the NGSS: 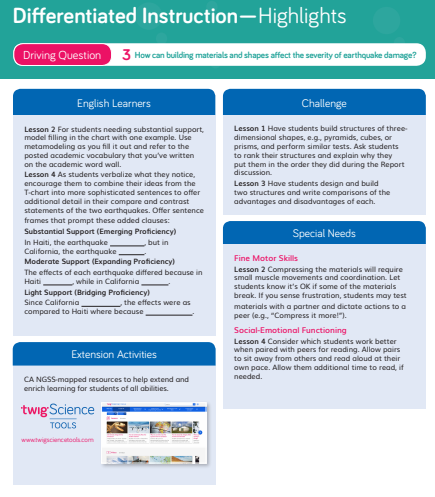 These supports provide instruction to teachers on how to scaffold and amend the activities to support students of varying backgrounds and abilities. This could range from sentence or writing frames to additional handouts and differentiated texts, or more challenging or accessible configurations of the task (e.g., reading one/two short articles in pairs could be turned into a synthesis of multiple sources task for Honors students).

EL sidebars provide strategies for teachers to support ELs of all proficiency levels, with specific guidance on how to tailor the lesson to accommodate ELs. Strategies include:

These sidebars do not address the specific home dialects of students, but instead encourage all students to use appropriate academic language in a formal register.

These sidebars offer point-of-use strategies for tailoring activities and learning points to accommodate special needs students of all backgrounds and abilities.

Below-Level Support sidebars are modifications to the task to support students lacking the prior DCIs or SEP/CCCs needed to access the task. They call back to the Grade 3-5 outcomes and expectations.

Below-Level support sidebars can vary dramatically in scope, and may include:

Honors sidebars can vary dramatically in scope, and may include:

Extension activities are used to provide opportunities for extended tasks aimed at honors and GATE students. These contain standard activity instructions. For example, they may be an additional data analysis piece which extends the results of a completed investigation, or DOK4-style investigation which builds on the work of a series of lessons. They may occur every 5-10 lessons.